Little did I know that when I felt a mild soreness in my throat and was experiencing some difficulty swallowing around Thanksgiving 2010, that I would soon be starting the fight for my life. After a couple of rounds of antibiotics that did not help my sore throat, my primary doctor referred me to an ENT specialist Dr. James Williams, MD in Covina, California the 3rd week of January 2011. 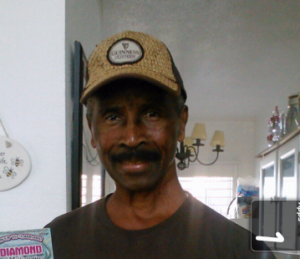 I was able to see Dr. Williams on a Friday. After examining me, he said he didn’t think it was serious but sent me across the street to Citrus Valley for pre-op tests. He decided to be safe and perform a biopsy of my left tonsil on Monday. Dr. Williams called on Wednesday to inform me that the biopsy came back as a squamous cell carcinoma (cancer) and that he was going to arrange a pet scan and a follow-up visit within the week. Dr. Williams explained the cancer to my wife and me and said he wanted to refer us to a doctor at USC by the name of Dr. Uttam Sinha, MD He explained to us that he did his internship at USC under Dr. Sinha and that if he, his father, brother, or best friend were diagnosed with this type of cancer, Dr. Sinha is the person he would send his loved ones to see. He then said he would personally call to get us an appointment as soon as possible.

We were able to see Dr. Sinha the following Thursday. Upon meeting Dr. Sinha and his entourage of interns and therapists who followed him in the room, he began to explain my options which were radiation, chemotherapy or surgery. I asked what he suggested and he said surgery. He explained that physical and occupational therapy would also be important to my recovery.

We agreed to the surgery and informed him we were going to be leaving town for the weekend and would schedule surgery when we returned. He told us to cancel our plans for the weekend, because surgery would take place on Monday. As we were waiting for his scheduling assistant Sheila to schedule the Robotic surgery, Dr. Niels Kokot, MD was introduced to us and told us there were two parts to this surgery and that I would have to have a left neck dissection a week or two after the tonsil surgery. Sheila informed us that the Robot was already booked for that Monday, but not to worry because she would work on getting me scheduled. She called us later that day to inform us it was a go for surgery on Monday, February 7th.

As planned, my left tonsil was removed and a portion of the back left side of my tongue was removed. I went to ICU with a breathing and feeding tube. Dr. Sinha gave instructions to not do any needle sticks or blood pressures on my left arm. He wanted to preserve the veins in that arm in case future surgeries would be needed for any reconstruction.

On February 9th as they were getting ready to release me, I told my wife I was not feeling right. She informed the nursing staff and the intern that was on duty.

We were walking in the hallway waiting on the release papers but I was stilled hooked up to a monitor. The intern noticed something and decided to order a few more tests before releasing me. It turned out that I had developed a pulmonary embolism, and I was immediately sent back to ICU. I was put on blood thinner which my wife had to inject in my abdomen twice a day for the next 5 months. Between the needle sticks and IVs in my right arm only and abdominal injections, I felt like an overused pin cushion. I was finally released to go home after a week. I left the hospital with a feeding tube in my nose for the next month. 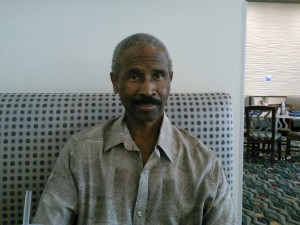 At 3 a.m. on Sunday February 21st, I ended up, via 911, at our local hospital in Upland, California with a bleed out do to the blood thinners and suction machine. An ENT was called in and could not stop the bleeding. The ENT had to take me into surgery to stop the bleeding. After Dr. Sinha heard about this incident, he gave us his cell phone number to call in case of any other emergencies.

On March 8th, I had my left neck dissection. It was put off a couple of weeks until I stabilized. Approximately 28 lymph nodes were removed, of which two came back as cancerous. I was sent home after a few days to recover and get my strength back before the next step.

Again at 3 a.m. on Sunday March 13th, my wife had to call 911. My face started swelling and this time is was a bleed in. When we arrived at the local hospital, the same emergency room doctor was on call. After looking at me, he told my wife this was “way over his head and there was not even enough time to airlift me to USC.

My wife gave him Dr. Sinha’s cell number to call. Another ENT happened to be in the emergency room and knew of Dr. Sinha and spoke to him over the phone. The whole emergency staff was surrounding us in the cubicle as my vitals were dropping and my breathing was becoming more difficult. The ENT made an incision in my neck to release the pressure and said he would have to take me into surgery. He later told my wife that Dr. Sinha walked him through the surgery over the phone. The call to Dr. Sinha saved my life.

I was sent to ICU at the local hospital again with all kinds of tubes in me. They gave me a dry board with which to communicate.

On March 14th a pulmonary specialist came in and said she wanted to put a filter in me for the pulmonary embolism. My wife remembered that the doctors at USC were against putting in a filter. She went downstairs to call Dr. Sinha. Dr. Sinha immediately answered his phone and said he was in surgery. He told my wife to go back to ICU and tell them we would not give permission for the filter. 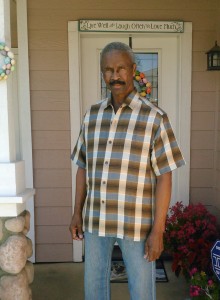 He also told my wife he was going to have Sheila arrange to have me brought to USC. By the time my wife came back to ICU, Shiela was on the phone with the nurses. We were informed that an ambulance was being sent with a couple of nurses to take me back to USC.

On the morning of March 15th, Dr. Sinha decided to again go into my neck to clean it out and look at what the ENT from the local hospital did on March 13th. Shortly after
returning to ICU for recovery, my blood pressure started rising and I started bleeding in again. Dr. Sinha’s intern known as “Cash” called Dr. Sinha. Our friends and family in the ICU waiting room said they saw Dr. Sinha fly down the hallway towards ICU. Dr. Sinha stood by my wife, who was trying to keep me calm, telling me to listen to my wife. Dr. Sinha was telling “Cash” what to do to relieve the pressure and buildup of blood in my neck. The decision was made that I needed to immediately go back into surgery for a second time that day. We asked for a longer hospital stay this time to make sure I was stable.

Dr. Sinha advised waiting on any radiation. We decided to start the radiation on May 31st. My wife and I drove 2 to 2 ½ hours daily from Fontana to USC (45 miles in traffic) for 12 minutes of radiation for 6 weeks. On July 7th (my 5th week of radiation) I could no longer swallow. A feeding tube was inserted in my abdomen for approximately 8 weeks. Radiation ended July 15th. During this whole 7 months I also had physical and swallowing therapy. I am now on thyroid medication due to my thyroid being affected by radiation. It was a tough 7 months.

I now see Dr. Sinha and Brenda Villegas, Speech Pathologist, every 6 months for my scope and follow-up. I am feeling blessed that come July 15th, 2014 I will be three years post radiation and (best of all) cancer-free.

First I am thankful to God for giving me the strength to fight during my journey.
I am so thankful for Dr. Sinha who is the most compassionate, caring and positive doctor anyone can ask for. I am thankful for his staff, the nurses on the 5th floor and 7th floor ICU, my therapists Kimi, Noriko, and Sandy. To Dr. Kokot for his part in my initial surgery, and to Dr. Casey O’Connell (Hematologist) who managed my blood thinners. 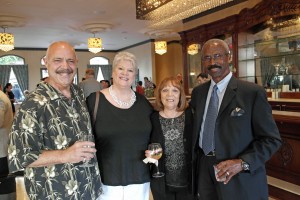 Lastly, we are thankful for our Head and Neck Support group. They helped prepare us for radiation, laughed with us, cried with us and continue to support us through this journey. Thank you for all you do.

Please remember that early detection is important with any cancer. Please do no put off getting checked if you are experiencing any unusual symptoms! For the life you save … will be your own!