It started with a small reddish spot on the left lower side of my chin with slight pain. I thought it was a bruise, so I watched it for a week.  My dentist x-rayed my entire mouth – he didn’t see any masses or tumors.  My primary care physician said it might be an infection, prescribed antibiotics and Motrin.  Over the next two weeks the reddish spot increased in size and pain.  He scheduled a CT scan of my face and said he didn’t think it was anything serious.  The CT scan was negative.  Next, an oral surgeon x-rayed my entire mouth said there was no evidence of any mass or tumor. He said, he thought the problem was caused by a bad tooth on the lower right side of my mouth and pulled out my tooth.

Next I went to the ENT doctor and had a biopsy which came up negative.  He didn’t know what was causing the problem. But everything was negative. My face began to change shape and the pain was becoming unbearable.

I then went to an infectious disease specialist. He did lots of blood tests, cultures, more scans and MRI’s. All negative, he didn’t know what was causing the problem. He kept trying different antibiotics and said he would consult with a few other doctors to see if he could help me find what was causing the problem. My face was now extremely disfigured, and the pain was unbearable. I couldn’t eat, or sleep because of the pain. I was finally sent to a hematologist/oncologist for pain medicine (morphine), which did not help.  I spent another 5-1/2 months seeing other doctors who could not help. 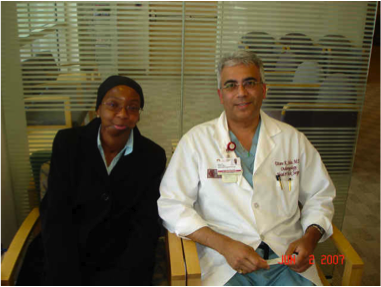 I was finally referred to Dr. Sinha at USC, and within 5 minutes of seeing me he said you have cancer. He told me my best chance for survival was radial surgery, so I said ok.

I had surgery at USC where I had a maniblectomy with right leg flap reconstruction. They removed my entire lower jaw, bone, teeth, gums etc. and replaced it with bone, muscle and tissue from my right leg along with a metal plate. I also had a tracheotomy, and a gastric feeding tube. I was in a medically induced coma for awhile because of intense pain and swelling. Recovery was long and painful. I had to learn to swallow, walk and talk again.

I also had 6 rounds of chemotherapy – CHOP-Ritaxian, every 21 days and suffered with side effects even though I took the steroids, anti-nausea medicine, and vitamins.  I weighed 88 pounds on a good day.   Just before my last treatment, I got another call saying I would also have to have radiation therapy. They made a mask to fit over my face and neck, to keep me still and in the correct position. Radiation wasn’t too bad. I had mouth sores and chronic weakness. After the fifth chemotherapy treatment I went into remission.

I had chronic anemia for two and a half years. I am now gaining weight and doing better. I have chronic facial pain and spasms, right leg pain, numbness and weakness. My face is extremely disfigured. I had five teeth on the upper right side that have since been removed.  I have no teeth and the metal plate is coming through on the inside of my mouth. I am hoping to find someone who can do reconstruction on my mouth to make my face more normal. Also I hope one day to be able to eat normal food again. When I finally started getting better, my mom became ill and passed away after a few months.

I have my family, my faith in God, and that is what helps me to keep going.

I am a Head and Neck Cancer Survivor.
– Althea Tymony