Standing on the edge of the Grand Canyon in January of 2012, peering down towards the Colorado River (that is in spots up to a mile deep below the rim) I was in complete awe.

Such a magnificent wonder of nature lie before me. I was anxious knowing that I was about to hike to the bottom, descending through half of a billion years of exposed geological history. WOW! Better yet, I was going to spend the night camping at the base of the canyon before making the ascent the next day.

Being 68 years old made the ordeal of hiking the Grand Canyon all the more daunting. But I had worked hard, trained, mentally prepared myself, and got into great shape. I was ready to face what I thought was going to be the most difficult endeavor of my retirement.

But I was wrong … totally, absolutely, completely … wrong!

What I did not know was that just a few months later I would be diagnosed with Head and Neck Cancer, stage 4 squamous cell carcinoma. Instead of being challenged with completing some (now almost meaningless) personal achievement, I would be battling for life itself.

It was in the early summer of 2012 that I had noticed a lump on the right side of my neck when shaving. I had no other symptoms, I felt good. Luckily I had a regular doctor’s appointment scheduled. During that appointment I told my doctor about “the lump”. 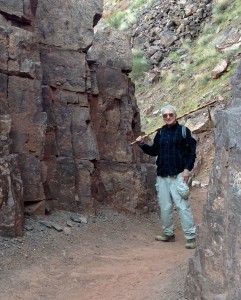 I got “the call” a couple of days later asking me to come in to see my doctor. I knew something was afoot — for good news would have been communicated over the phone. What my doctor informed me was a shock to the system – I had stage 4 squamous cell carcinoma – Head and Neck Cancer. What in heck do I do now? I didn’t have a clue.

I suppose, like most people, I had convinced myself everything would turn out ok. Cancer was something that happened to other people, not to me. Still, upon the news my family rallied around me. Together we decided we would get through this. My daughter even convinced me to meet with folks from a “support group” … something that was totally outside my nature.

The morbid details of my cancer treatment are simple … seven weeks of radiation, many rounds of chemotherapy, and a G-Tube for nutrition. I also went to a support meeting and found something there I hadn’t expected – something called “Hope”!

I began to feel a little better in the later part of Jan 2013. I got rid of the G-Tube in March with stamina returning and resumed light exercise. By summer 2013 I was back to normal stamina and hiking again.

Believe it or not I did another Grand Canyon hike in Dec 2013 and I am going to hike it again in April 2015. 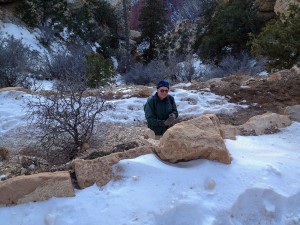 Best of all, my recent MRI found no cancer had returned – “Yea”!!!

I appreciate the counsel of the HNC Support Group in letting me know what to expect and that I was far from alone in experiencing this life situation. I am also appreciative of the fine team of medical professionals who treated me and family and friends who supported and encouraged me from day one of this experience.

The Grand Canyon is easy to conquer when compared to cancer. Yet, with the will to win, a dedicated medical team, a sense of humor, and the support of family and friends anything is possible. Even beating cancer.

Remember this during your battle. You can win. Don’t give up. Fight On!