The Gary Uline Story (In his own words) 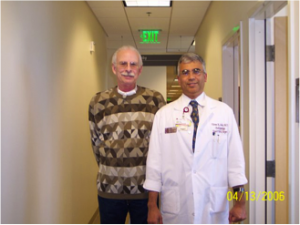 “When the odds are sayin’ you’ll never win, that’s when the grin should start.”*

In February of 2004 I was diagnosed with stage III cancer of the larynx. The doctors who were responsible for my treatment decided that because of the location of my cancer a treatment of chemotherapy and radiation would be used in seeking a cure. From April thru June of 2004 I received chemotherapy once a week and radiation Monday thru Friday.

At the start of treatment I weighed 190 lbs. However; because of the effects of the radiation I lost 50 lbs and had to have a “G” tube inserted into my stomach. I lost the ability to swallow anything solid or liquid. Also breathing was getting harder by the day.

The good news, I was declared cancer free in July of 2004. However; in May of 2005 things got so bad with my breathing I had to rush to the hospital to have a “trach” installed in my throat, which allow me to breathe.

So, here I was, a 59 year old man who had had successful cancer treatment (and was cancer free) but now had two tubes protruding from my body. One tube used to eat and take in liquids, the other to aid my breathing. Worse, there were few sign that this situation was going to get any better.

Then one day, during an office visit, my Oncologist told me about an experimental program at USC called “VitalStim”. I was excited at ANY chance of getting my life back to normalcy. So my wife and I immediately contacted Doctor Uttam Sinha who was the head of the program. He agreed to take my case.

I had an office consultation with Dr. Sinha’s group to assess how best to treat my condition. One of the tests I took was called a “Strobe”. This test determined that I could benefit from the VitalStim program.

I was introduced to Brenda Villegas who would be doing the hands-on part of the therapy. Over the next eight months I saw Brenda twice a week for therapy. I worked hard and I regained the ability to swallow liquids & some solids.

Then during a routine “Strobe” test in early 2006 it was discovered that my larynx had attached itself to the back of my throat. My only choice was to have my larynx removed and along with it my ability to speak. (On the upside I would be able to eat, drink, and breathe almost like normal and recover some quality of life).

Much to my relief, the genuine empathy found within Doctor Sinha’s group rose up and said: “NO! we will not surrender your ability to speak as the booty for other “quality of life” factors. We will be diligent and uncover another option”. And true to the promise, in short order Dr Sinha came up with a whole new way of treating my condition.

By respecting me as an individual whose life has both dignity and worth, not as just one more “patient” on Thursday’s docket, Dr. Sinha has given me a gift more valuable than any treasure. He has given me the gift of becoming a whole person again. The creative procedure Dr. Sinha (and his team) designed for me included doing part of the operation by way of my “G” tube, so simple the idea, so original the concept, so effective the treatment.

As a result, as of today I am once again able to eating anything I want, my breathing is back to normal as well and best of all I’m still cancer free. Thank you, Dr. Sinha, Brenda, and team. I will remember what you did for me.
* Excerpt from: “Heart”, Damn Yankees – The Musical –Words and Music by: Richard Adler & Jerry Ross